Just read this article from Dumb Little Man Tips for Life - one of my favorites and, I assure you, NOT DUMB!

Backpackers vs. Glampackers: What Kind of Traveler Are You?

It was a good read and reminded me of my constant dilemma - deciding whether or not I am a Country Mouse or a City Mouse!

You may remember this Aesop fable from your childhood. I am not sure why, but I think of it often as I travel for both work and pleasure.

Country Mouse City Mouse reviews the lives of two cousins living two very different lives, one in the city and one in the country. Each feels the other's life is so much better, but after switching places, find each has its pros and cons! 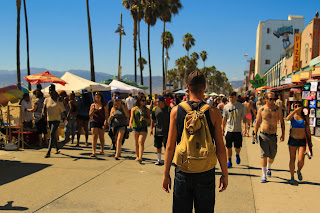 Living in rural Delaware as I do, I love going to DC, Philly, Atlantic City, and Baltimore on a pretty regular basis - I often brag that I am two hours from anywhere and it is pretty much true. It is often nice to go to the city and have access to shopping and restaurants we may not have at home and especially nice to RETURN HOME!

Last week I had an especially aggravating time with traveling to DC and then Crystal City. There was so much construction and traffic; it was raining on top of it all. I got home and declared. Ok, I am done wondering: I AM A COUNTRY MOUSE!

But, this week I am back to wondering. I guess I will always be a bit of each. When we do travel, we will often camp at a state park in a tent or a cabin. But, we can be found other times spending an inordinate amount of money to have a room with a view of the Canadian Falls or a shot of excellent bourbon we can't find in our local stores.

The bottom line - it's good to have choices!  Traveling exposes you to people, food, and places you would not otherwise know about any other way. Appreciate where you are and plan where you will go. I know that is what I will do!

Because you matter!  Biohacking: Healthier from the inside out | LifeVantage United States (en) 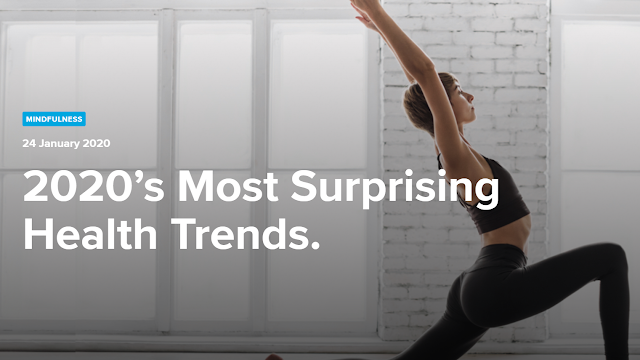 Ok, I have to admit that when I was at the salon recently, my stylist informed me she didn't know I was so "bougie." This after a conversation about our coffee making exploits and my pontificating about the best coffee we can buy locally (Indian River Gourmet Coffee - available online!) and there being no more Deer Park 5 gallon bottles at the Safeway.

According to Google: An adjective

A compliment, she assured me! I guess it is true - Jim and I have certain brands and minimum standards for a number of things (I more than him I'm afraid!):

Coffee - Indian River if possible, if not then Notting HiIl Coffee in Lewes or Starbucks
Water - Fiji for small bottles (I try not to for the environment!) and Deer Park for the 5 gallon
Eggs - only Twin Post Farm
Pork - only Elysium Farm
Ziploc - only name brand
Rubbermaid - only name brand
Reynolds wrap - only name brand AND heavy duty wide
Beer - craft IPA, actually there is a pretty healthy list of these!
Here is where my bourgeois really shines!:
Wine - Bota Box Chardonnay at home, regardless - three ice cubes!
Chicken - only Perdue bought here in Delaware - elsewhere it tastes "old"
Apple - I drank the "kool-aid"
Staples for office supplies
Food shopping - Lewes Farmers Market Lloyd's Market, and Fresh Market, especially for produce or meat
American, local, thrifted anything if possible!

I guess that gives you enough of an idea of what Michelle at Coastal Salon is privy to! There may be even more of a list of I would never buy/eat/own, now that I think about it!

We have a small cadre of farmers that meet up here in Lewes on the offseason every other week:

It is a real treat to see these farmers all year-round and get good, well cared for and nourished foods!

Often we get into trading recipes and talking about odd cuts of meet with Bob, from Elysium Farm - last week we gave him a recipe for Pepper Pot Stew that we most often use turkey in, but thought he might use, oh I don't know, pork? He sold us some quick fry pork chops in return. These chops are quick to fry up and you can almost tell the hogs have been raised by people who hug and pet them! Really, they have pictures on their table: 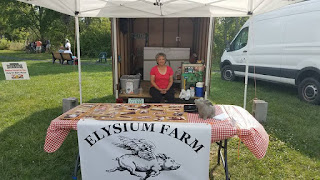 I decided to use the dutch oven to saute the onions to flavor the pork - as if they didn't have enough! I removed them to add to the sauteed cabbage. Meanwhile, I had some beautiful golden beets roasting in the toaster oven - first whole after rubbing with olive oil, salt, and pepper, then quartered. 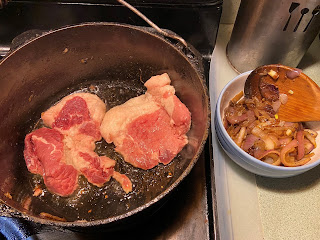 Four came in the pack, but I sauteed two at a time.  I found it worked best to put the fatty side in the center and to turn the pan around after about two minutes, since I have an electric stove. It only takes about 4 minutes to brown the first side and that or less for the other. 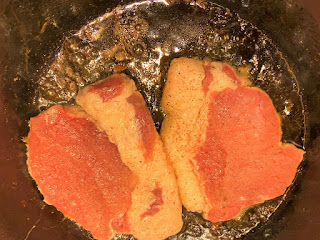 When done, I covered them with Reynolds wrap and let it sit in the oven while I sauteed the cabbage, added back the onions and flipped around the beets! Don't forget the salt and pepper - that reminds me, we use Himalayan Pink Sea Salt, which might actually be good for you. 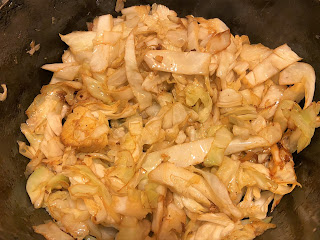 I decided to put some color on the cut sides of the golden beets - they are my favorite vegetable! 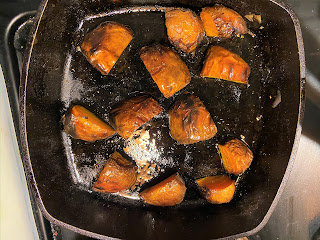 I served the chops on the sauteed cabbage and onions, with the beets to the side. I almost toasted some homemade sourdough bread - I only use http://sourdoughbreads.com/ - her products and methods are less fussy and tastier than others I have tried! In the interest of saving carbs and unsure we could fit it in any way, I held off on the bread. 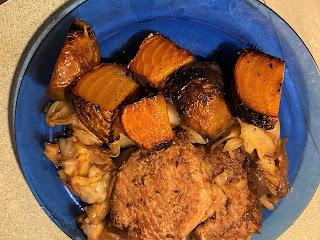 Well, the holidays flew by as quickly as always. An odd year this!  We decided to forego the drive to Baltimore to visit Jim's family for Christmas and having my dad over Christmas Eve, typically. Instead, we planned to smoke a young turkey we got from the Fresh Market for Christmas and have my dad over then. Unfortunately, he became ill and, not sure what to do we ate leftovers.

You may remember that Christmas was in the middle of the week this time around - we both worked the days before and days after. Although Dad still wasn't feeling well, the turkey wasn't getting any younger, so we decided to make it after work....It did not go well!

The wind dampened the coals, but Jim was finally able to coax them to life and get things into shape. Sweet potatoes were rolled in oil, salt, and pepper, wrapped in foil and tossed in the coals. The turkey - positioned just right! With the Brussel sprouts ready to roast in the broiler with pistachio nuts and dried cranberries, it seemed we were in for a good meal!

NOT! The wind kept Jim at the weber checking and fussing and when I thought the larger-than-normal turkey was nearly done, I put in the sprouts. Nope, turkey not done. Maybe another half hour we guessed? Ok. I set an alarm and rewarmed the sprouts in the toaster oven (my go to for broiling!) accordingly. Meanwhile the poor sweet potatoes were still in the coals...

When we finally brought the turkey in and covered it with foil, the potatoes and Brussel sprouts we burnt. So sad! It was about 10:00 pm then. I tore off a leg, gnawed on it for a while, we looked sadly at each other, shook our heads, packed up the turkey, and went to bed.

Needless to say, I got creative with the turkey leftovers for the next couple of weeks! On the weekend I broke the turkey down, putting one breast in a Ziploc (only a real one will do!) in the fridge and the other in the freezer. The wings went right into my stock parts Ziploc in the freezer and the dark meat in a big Rubbermaid  (sorry - I do still call it Tupperware if it is any consolation!) in the fridge.

I wanted to make a pot or Shepard's pie, but never did. We had the typical turkey sandwiches (once with avocado and another with bacon!) and turkey noodle soup. The most creative thing we had was turkey cacciatore. That was delicious and a really good use of the dark meat.

Normally we have some sort of a trip, if only on the weekend, but we stayed close to home last month. I do a good bit of regional traveling for work, which gets me out seeing the sites and stopping here or there for a yummy meal or a varied shopping experience.

When I see my patient in New Jersey, I always try to see if Agnes' Cafe has any mango (or if not, blueberry) muffins left - they are to die for!  In Cambridge, RAR Brewing has good food too! On Kent Narrows, the Fisherman's Inn has the best calamari - I am always tempted to drink the broth! Cult Classic is definitely worth checking out too, they often have a food truck.

This is a typical week of traveling for work:

Want to improve or start your own blog?

Mary Sherwood Sevinsky
Lewes, DE, United States
I am an Occupational Consultant and Medical Case Manager. I work with a variety of folks to ensure a more satisfying quality of life. My individual clients are looking for support at medical appointments or with career services such as Resume, LinkedIn Profile, and Cover Letter writing or Interview and Career Coaching. I provide Disability Adjustment Counseling, Job Search Assistance and Labor Market Surveys for Insurance Companies and Attorneys. Mary Sherwood, MS, CDMS, CCM, Occupational Consultant Landline 302.644.1827 Mobile: 410.444.1989 Skype Mary.E.Sherwood Want to start your own blog or improve your current one? Visit https://bit.ly/2TVpSlo to access FREE tools and resources!

October 2018 We travel a lot - different kinds of traveling and cooking and eating.  Recently we flew to tent camp in Arkansas for a Bl... 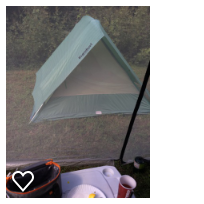 What do you think? Let me know!